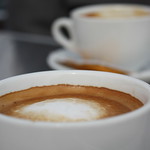 I was at breakfast with three friends Thursday morning. It was early at one of those funky little breakfast & lunch joints south of downtown Calgary. I knew everybody, but everybody hadn’t met each other yet, which is why I’d invited them all. Within two minutes of everybody arriving we’d got each other laughing and talking and chatting and catching up. We traded intelligence on work in our respective fields, checked on potential client reputations, and bounced business ideas and opportunities.

I came away from breakfast feeling energized, motivated, and happy. Happy that I was privileged to the part of a small circle of smart, funny, and inspiring people.

Then I said to myself – “Self: You shouldn’t be you’ve just been networking. Networking is supposed to be an onerous chore! Get your head on straight!” Then I told myself to take a flying leap and proceeded to have a great day instead.

Here’s the question that “networking” is trying to answer: If I lost my job (major contract / largest income stream) tomorrow, to whom could I reach out to find my next gig? Who else would I want to work with again? Who knows everybody in the business and could point me in the right direction?

This is networking: keeping in touch with people who can help you, or more importantly, whom you can help. Why not be the one that people reach out to when needed? Wouldn’t that make it easier if and when you need something?

You don’t want the only reason you’re talking to Fred or Flora for the first time in two years is because you just got laid off. That’s awkward. And much less likely to be successful.

Question for the Comments
Who’s the first person you would reach out to if you needed to start looking for work tomorrow? When was the last time you talked to or emailed them?

Other Article You May Be Interested In:
Getting the Job You Want By Talking To the Right People
Your Personal Board of Directors
The Elevator Speech

Bernie works as a leadership and strategic business coach, consultant, and facilitator. He believes there are simple things outstanding leaders do well. He believes that not doing anything about bad leadership, once you know about it, is abuse and poor business practice. He believes the foundation of any organization is its values. He believes that that the workplace can be a place for both people and businesses to thrive. Not just survive.

Check out his other articles at practicalmanagers.com

4 thoughts on “The Joy of Networking”

Facilitation, coaching and performance - helping people and businesses thrive by providing purpose, direction, motivation, and the tools to use them